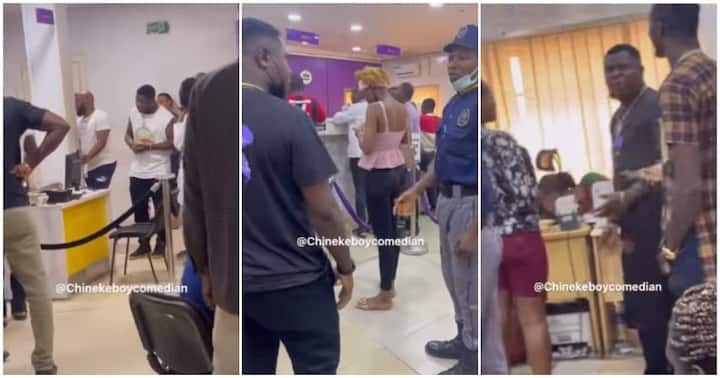 A Nigerian man stormed his bank and directed that they close his account for not sending him a text on his birthday which was the previous day.

Flaring up as he poured out his heart before the customers, the man slammed the bank, stating that other banks he has accounts with sent him texts.

The Imo comedian and content creator knocked the bank for only knowing how to debit and charge VATs on accounts.

He told the bank officials to choose between sending him a text on the spot or closing his account. While he painfully kept demanding that they close his account, customers burst into a birthday song for him.

Read Also: Yahoo Boy can’t be broke, he will bathe soap And Be Rich”: lady chooses who she will date in video

The song did the trick as the young man smiled and got calmer. He subsequently introduced himself, appreciated the customers and left.

He Was Surprised: Man Shocked as He Returns Home to Find out Wife is 7 Months Pregnant, Video Confuses People

“Age Is Just A Number”- Nana Ama McBrown And Mercy Asiedu Do Beautiful Dance In Video; Fans Love Their Bond