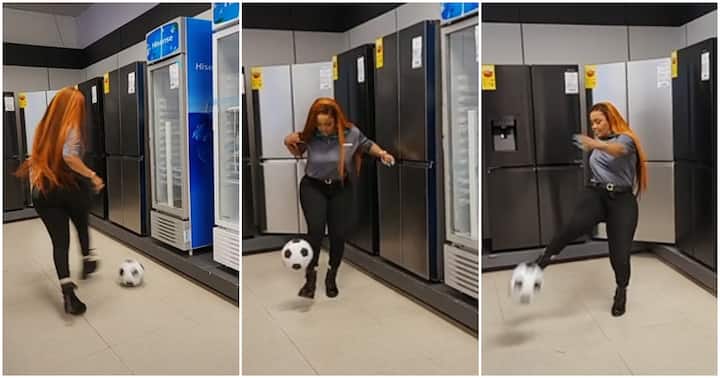 The actress, in a video, showed off her soccer skills as she juggled a football effortlessly, leaving many in awe of her talent.

Read Also: “You Are The Best Mum Ever”: Nursing Mother Who Has No Hands Uses Mouth to Feed Baby, Video Goes Viral

The actress was in a Hisense showroom while she had fun with the ball. She looked dapper in an ash t-shirt, black jeans and black timberland boots.

She played Black Sherif’s newly released song, Soja, in the background. She performed the tune in between her football session. She would pause for a bit and sing the melodious tune.

People were in awe of McBrown’s talent and praised her.

The actress stated in previous interviews that she used to play football professionally, and it was one of her dreams to be a footballer before her acting career took off.

It is not the first time McBrown has been seen playing football, but anytime she does, it surprises many.

Married Fella Makafui Dances To Asake’s “Joha”, Shows Off Back Whilst Dressed In Official Wear