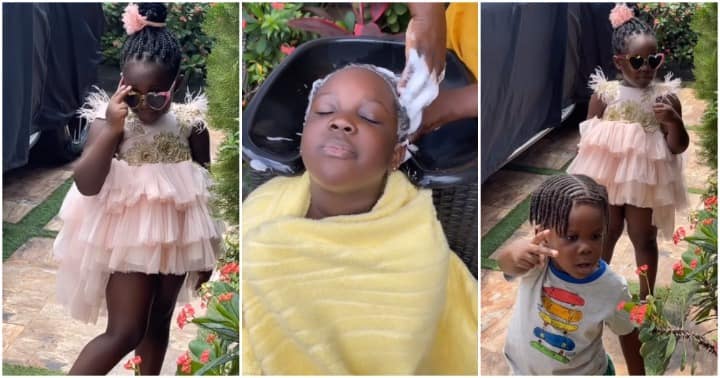 Stonebwoy and wife Dr Louisa Satekla’s daughter, Catherine Jidula, has shown off her sense of style and singing prowess in recent Instagram videos.

The four-year-old and her younger brother Janam were videoed by their mom while spending time together as a family.

Dr Louisa, who has been a doting mother to the kids since their birth has eyes for their sartorial selections as well.

In one of the clips on Jidula’s Instagram account, the child shared an unparalleled view when her mother indicated that her dress was too fitting. Jidula later heeded her mother’s request to strike a pose for the camera.

Read Also: “Love Na Your Mate?” Lady Holds Lover Tightly at Airport, Weeps in Video as He Gets Set to Travel Abroad

Before Jidula could pose for the camera, her brother briefly stole the spotlight but she took over with her swag and style. She flaunted her braids and her ensemble which included dark shades.

In a subsequent post, the girl was captured singing Gidigba, a song by her father, while someone was washing her hair.

McBrown shows off exquisite football skills; fans beg her to play for BlackStars